Some of Britain’s top ballet stars explain how they’re keeping in shape while stuck at home, and offer tips for the locked-down everywhere. 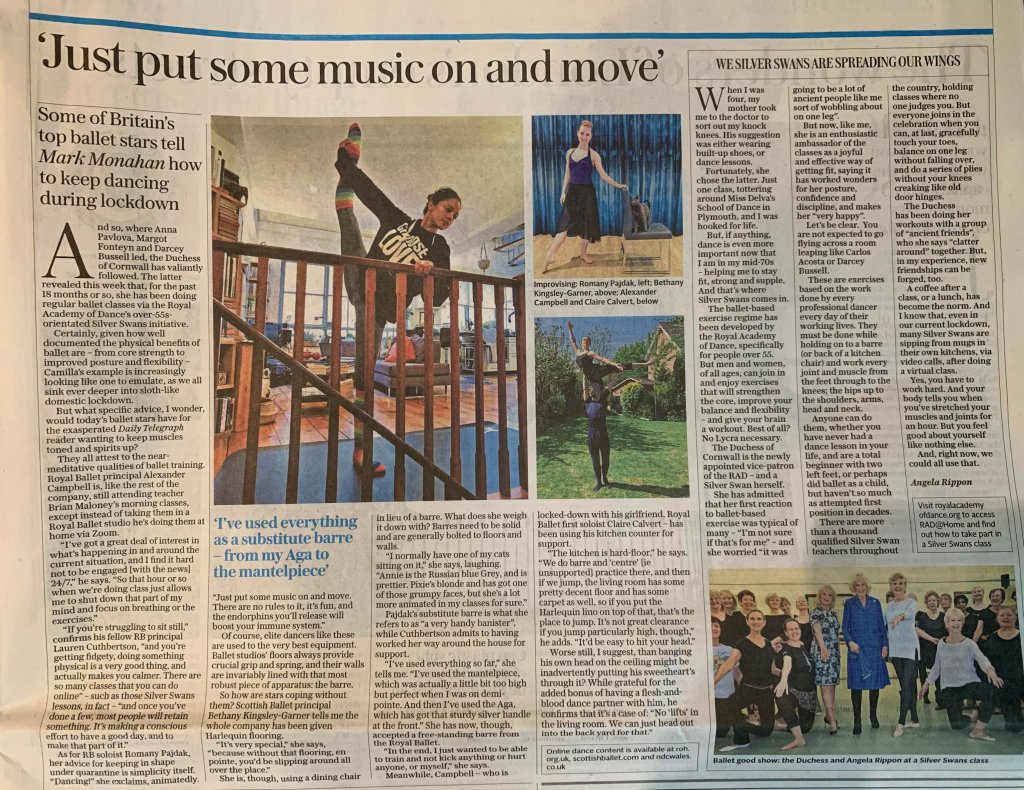 And so, where Anna Pavlova, Margot Fonteyn and Darcey Bussell led, the Duchess of Cornwall has valiantly followed: the latter revealed this week that, for the past 18 months or so, she has been doing regular ballet classes via the Royal Academy of Dance’s over-55s-orientated Silver Swans initiative.

Certainly, given how well documented the physical benefits of ballet have long been (from core strength to improved posture and flexibility), Camilla’s example is increasingly looking like one to emulate as we all sink ever deeper into sloth-like domestic lockdown. But what specific advice, I wonder, would today’s ballet stars have for the exasperated Telegraph reader wanting to keep muscles toned and spirits up during lockdown?

They all attest to the near-meditative qualities of ballet training. Australian-born Royal Ballet principal Alexander Campbell is, like the rest of the company, still attending teacher Brian Maloney’s morning classes, except instead of taking them in a Royal Ballet studio he’s doing them at home via Zoom.

“I’ve got a great deal of interest in what’s happening in and around the current situation, and I find it hard not to be engaged 24/7,” he says. “So that hour or so when we’re doing class just allows me to shut down that part of my mind and focus on breathing or the exercises.”

“If you’re struggling to sit still,” confirms his fellow RB principal Lauren Cuthbertson, “and you’re getting fidgety, by concentrating on doing something physical that you’ll benefit from is a very good thing, and it actually makes you calmer for the rest of the day knowing that you’ve done something, that you’ve done a physical task. There are so many classes that you can do online” –  such as those Silver Swans lessons, in fact – “and once you’ve done a few, most people will retain something. It’s making a conscious effort to have a good day, and to make that part of it.” 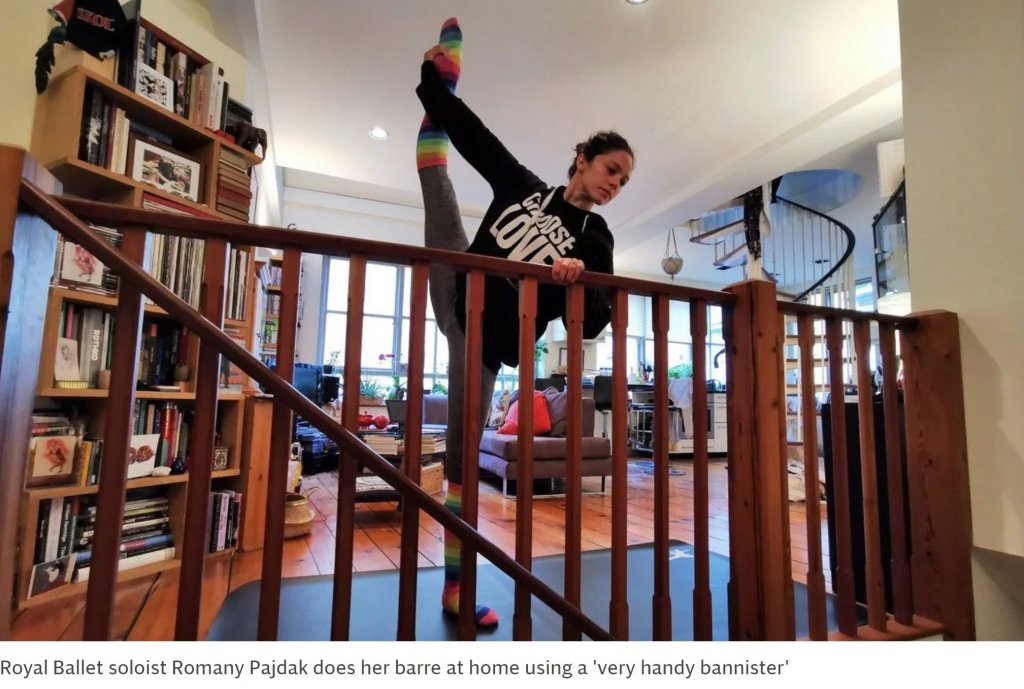 As for RB soloist Romany Pajdak, her advice for keeping in shape under quarantine is simplicity itself.

“Dancing!” she exclaims, animatedly. “Just put some music on and move. Don’t worry how you’re moving – just move. There are no rules to it, it’s fun, and the endorphins you’ll release will boost your immune system, so that will have a positive effect in fighting whatever we’re fighting right now. Fill the house with music and dance – that’s my recommendation for getting fit.”

But these, of course, are extraordinary times, not least for these preternaturally finely tuned performers. After all, their average day (six days a week) is traditionally an intricate tapestry of the studio-based “class” and rehearsals that are the backbone of their profession – of their existence, even. This all usually requires purpose-built surroundings and equipment and a degree of physical contact that would be arrestable in any other profession, not to mention titanic amounts of movement, discipline and dedication, all predicated on the ultimate “carrot” of seeing the hard work pay off on stage.

So, what was it like, last month, for a dancer suddenly to be told they had to stay at home for the foreseeable future?

“I think initially it was kind of hard to get our heads around just how long it might be,” says Campbell. “The uncertainty meant we were thinking: ‘Are we going to miss performances? How many performances? What performances?’ (The official answer came this week, as it happens: the rest of the spring and summer season is now cancelled.)

But dancers are a resourceful lot, and practicalities soon kicked in. “Quite quickly,” continues Campbell, “your focus turns to, ‘How can I keep in some sort of shape and fitness? What can I do in the space that I have?’ It’s not possible to keep going at the same rate as when you’re doing four to five hours a day rehearsal plus class then shows, but you just want to try to keep in some sort of reasonable shape so that when we do go back it’s not such a shock to the system.” 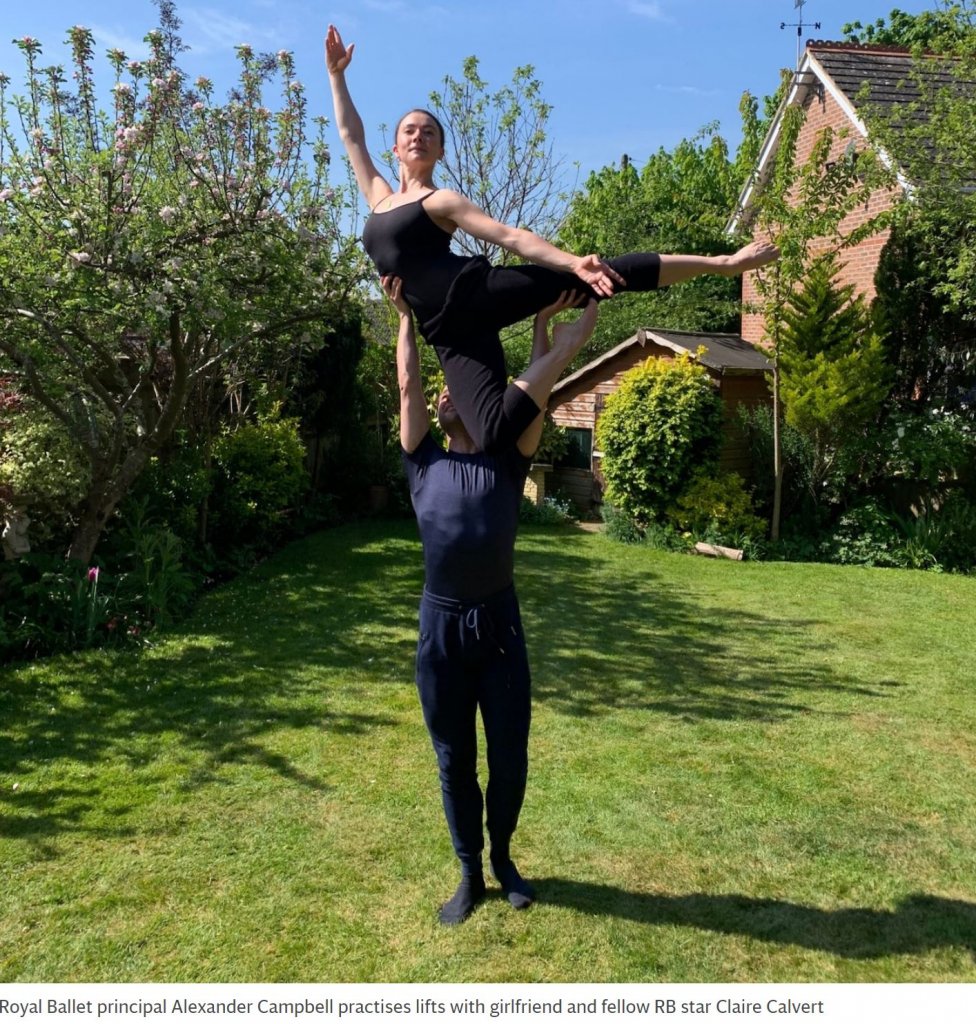 And for Pajdak, the Royal Ballet’s online classes, which Maloney leads from his kitchen, have helped immeasurably.

“It’s really quite special connecting in to everyone through this platform,” she says, “and it really helps motivation. The first week, I was fine doing it on my own, but then it became a bit more difficult. Somehow, plugging into a class and having someone there instructing, and also knowing everybody else is doing the same, makes it kind of OK.”

However, online technology was only ever going to be part of the solution. Ballet studios’ floors always provide crucial grip and spring, and their walls are invariably lined with that most crucial and robust piece of apparatus: the barre.

Like the Royal Ballet, the leading north-of-the-border company, Scottish Ballet, has recently provided its members with Harlequin flooring. “It’s very special,” explains SB principal Bethany Kingsley-Garner,” because without that flooring, en pointe, you’d be slipping around all over the place – so we’ve got that kind of comfort of the norm.” 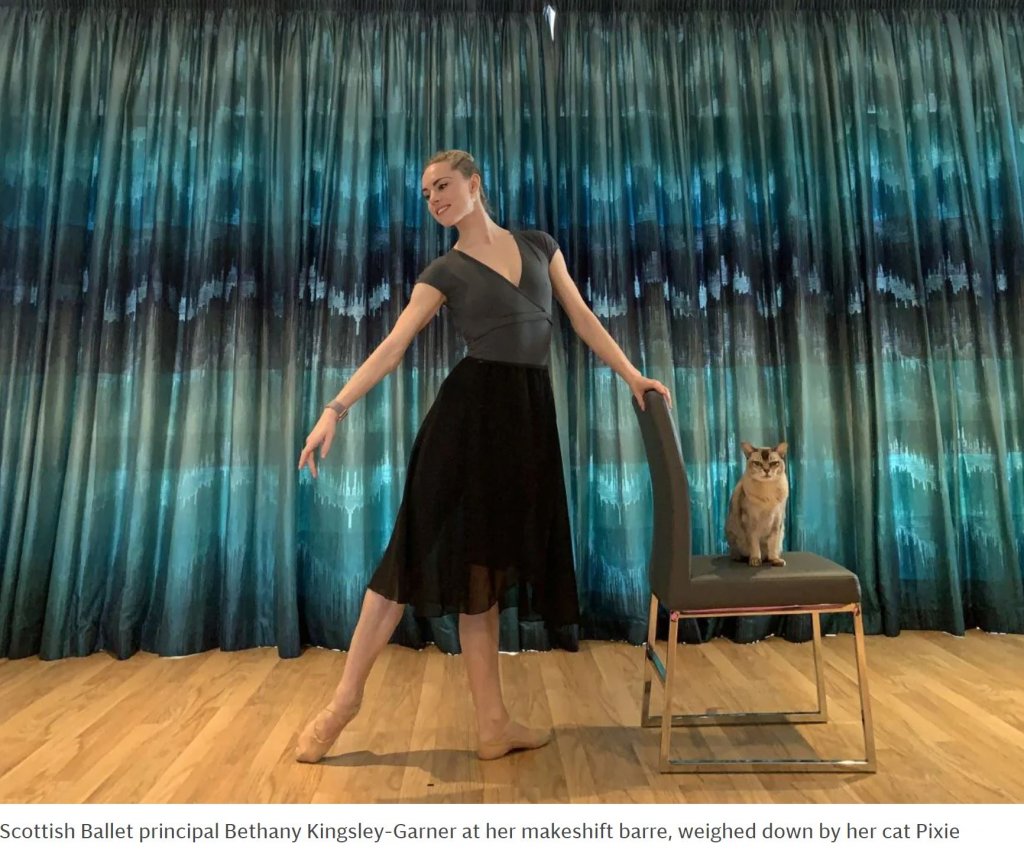 As for that all-important barre, Kingsley-Garner (who is also live-streaming a class of her own every Friday morning via Scottish Ballet’s website) tells me, “I have a dining-chair for that.” But what, I wonder, does she weigh it down with? Barres need to be rock-solid and are generally bolted to floors and walls.

“I normally have one of my cats sitting on it,” she says, laughing. “Annie is the Russian blue Grey, and is prettier. Pixie’s blonde and has got one of those grumpy faces, but she’s a lot more animated in my classes for sure.”

Pajdak’s substitute barre is what she refers to as “a very handy banister”, while Royal Ballet principal Lauren Cuthbertson admits to having worked her way around the house for support.

“I’ve used everything so far!” she tells me. “I’ve used the mantelpiece, which was actually a little but too high but perfect when I was on demi-pointe. And then I’ve used the Aga, which has got that sturdy silver handle at the front which is sturdy and like a barre. Another perk of being by the Aga is that it’s quite warm,” she adds, “so that was quite nice, except that the dog was always by my feet.”

Cuthbertson admits, however, that she ended up accepting the Royal Ballet’s offer of a proper, free-standing barre. “The novelty of holding whatever you could grab on to and turning your angles to suit whatever room you were in wore off. In the end, I just wanted to be able to train and not kick anything or hurt anyone or myself!”

Meanwhile, Campbell – who is locked-down with his girlfriend, Royal Ballet first soloist Claire Calvert – uses his kitchen counter for support. “The kitchen is hard-floor,” he says, “We do barre and ‘centre’ [ie unsupported] practice there, and then if we jump, the living room has some pretty decent floor and has some carpet as well, so if you put the Harlequin lino on top of that, that’s the place to jump. It’s not great clearance if you jump particularly high, though,” he adds. “It’d be easy to hit your head.”

Worse still, I suggest, than banging his own head on the ceiling might be inadvertently putting his sweetheart’s through it. While grateful for the added bonus of having a flesh-and-blood dance partner with him, he confirms that it’s a case of: “No ‘lifts’ in the living-room! We can just head out into the back yard for that.” 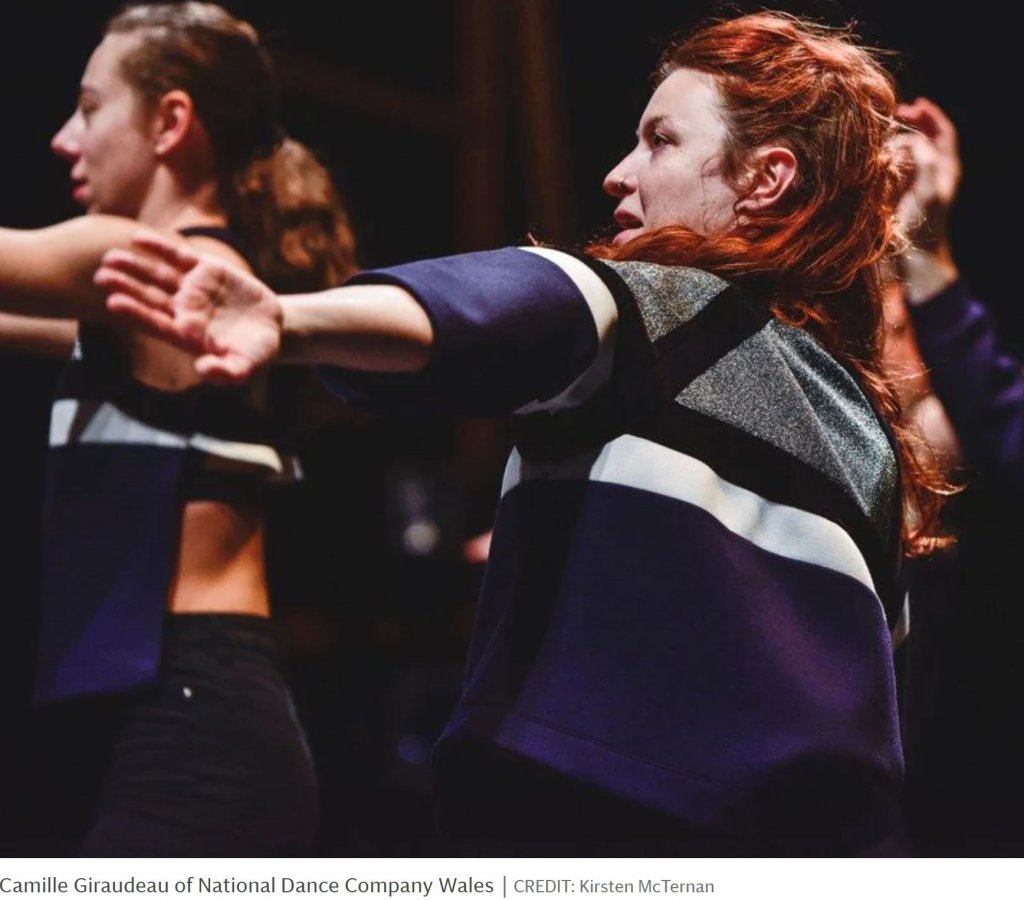 But dancers (despite not, as a rule, being natural runners) have also been donning trainers and heading out of their front doors. Cuthbertson tells me that she and her colleagues have been put on “a bit of a running programme by the company’s sports team”. Kingsley-Garner, missing being able to do “explosive jumps” chez elle, confesses to doing “a cheeky few” when she runs beside the Clyde and no one’s looking. And Camille Giraudeau, of National Dance Company Wales, says that as well as barre and yoga, she’s caught on the current trend for 5k runs. “I’m trying to do those,” she says with a disarming laugh. “I haven’t been massively successful so far, but I’ve heard the theory – it takes practice.”

However, what has proved a tremendous success are NDC Wales’s online offerings. Despite boasting just 10 dancers, this more contemporary-leaning company has arguably been the British market-leader these past six weeks in terms of its online offerings, such as a brand-new live “staging” (still available on YouTube) of one of its past pieces, Alexandra Waierstall’s abstract 2067: Time and Time and Time, with each dancer simultaneously performing from his or her home.

This is a remarkable phenomenon, not least because for dancers a fundamental part of performing is feeding off each other’s energy on stage. What on earth, I wonder, is it like to perform in your sitting-room with nine other people that you can’t see except, perhaps, as little postage-stamps on a screen?

“I guess it was a really strange experience,” confirms Giraudeau, who “but it was also a really beautiful experience to be able to dance with our friends and colleagues again. For me, it felt like a real relief to come together, even though it was on another platform. It was a reminder, a taste of what we used to do, to celebrate the fact that we could do something, and carry on connecting with our audience.”